Today we cleaned The Boss’s dryer vent. As you can see from the photos, this is a PERFECT example of the value of our service. The duct itself was bent and pierced at one end, was not properly positioned out of the wall, and literally half of the airflow was blocked and venting back into the garage. It was also pretty filthy back behind there, so the technician cut off the damaged portion of the duct, shortened the other end so that it mounted properly against the wall, and of course aimed it straight out of the house, before attaching the vent back onto the house. While he was back there, he cleaned out those spiderwebs and excess lint. Works great now!!

Our technician went to complete a move out cleaning today. This is one of those cases where the basic cleaning turned into a restoration job. There were a lot of stains from a variety of sources. He spent a little over three hours on this one room and it looked amazing afterward. Not every story has this happy ending, but in this one we saved the carpet and the customer’s security deposit.

We have a number of restaurants on reoccurring service and the pictures here show why. Buildup of grease and oils from food wrecks havoc on carpeting and build up quickly. This food prep kitchen hadn’t been cleaned in five years and it showed. It took three successive cleanings with a heavy degreaser before we could see the fibers under all that dirt. This client wanted quarterly cleaning since he wasn’t sure how quickly it would build up, but I have a feeling we will be there more frequently!

When pets get stressed out they misbehave and we are often called to clean up the aftermath of their stress. In this particular case, the dog is 6 years old, but owners now have wall to wall carpet after years of hardwood. This resulting damage is what we call “Zone Cleaning” because it is so extreme in certain areas. A zone like one of these can take from 2-3 hours to sanitize and flush completely. No small task, but we are here for you! 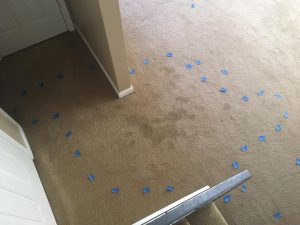 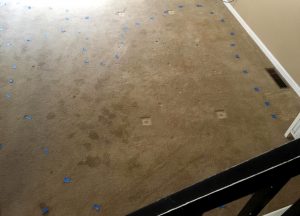 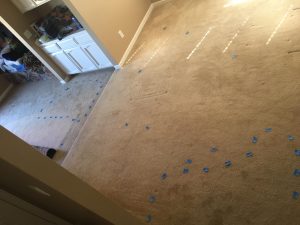 Sausalito has its logistical challenges, but it sure is beautiful!

We have two types of vans – a smaller van with a very strong portable machine, and a larger van with truck mounted equipment. Our smaller van sure can get into some unusual locations that we would never be able to reach with our hoses.

This series starts at the street and goes down some 60 stairs along the side of the building. That’s tricky maneuvering for guy with a machine that weighs over 100 lbs. We’re just glad we don’t have to carry our groceries all that way each week! 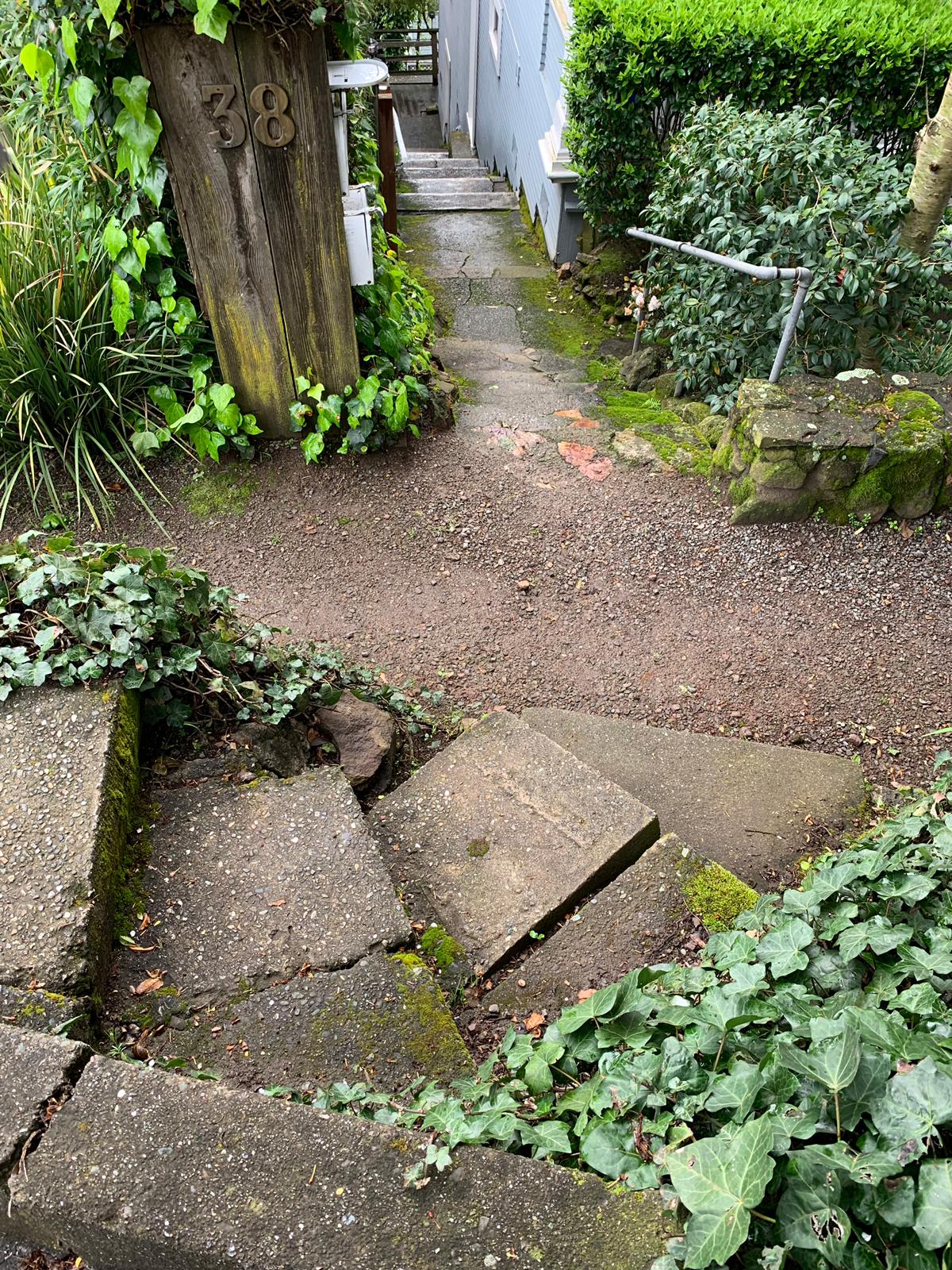 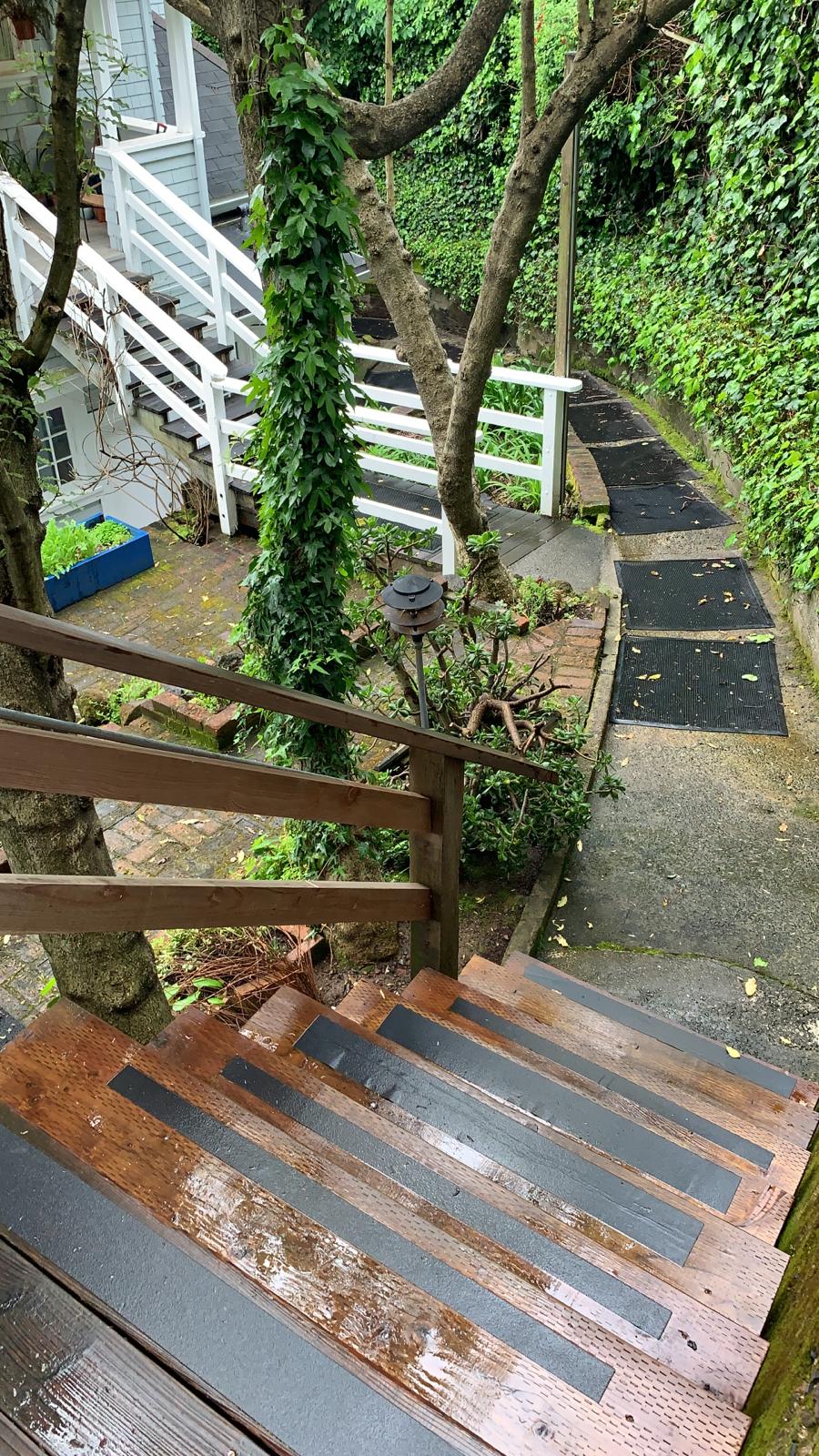 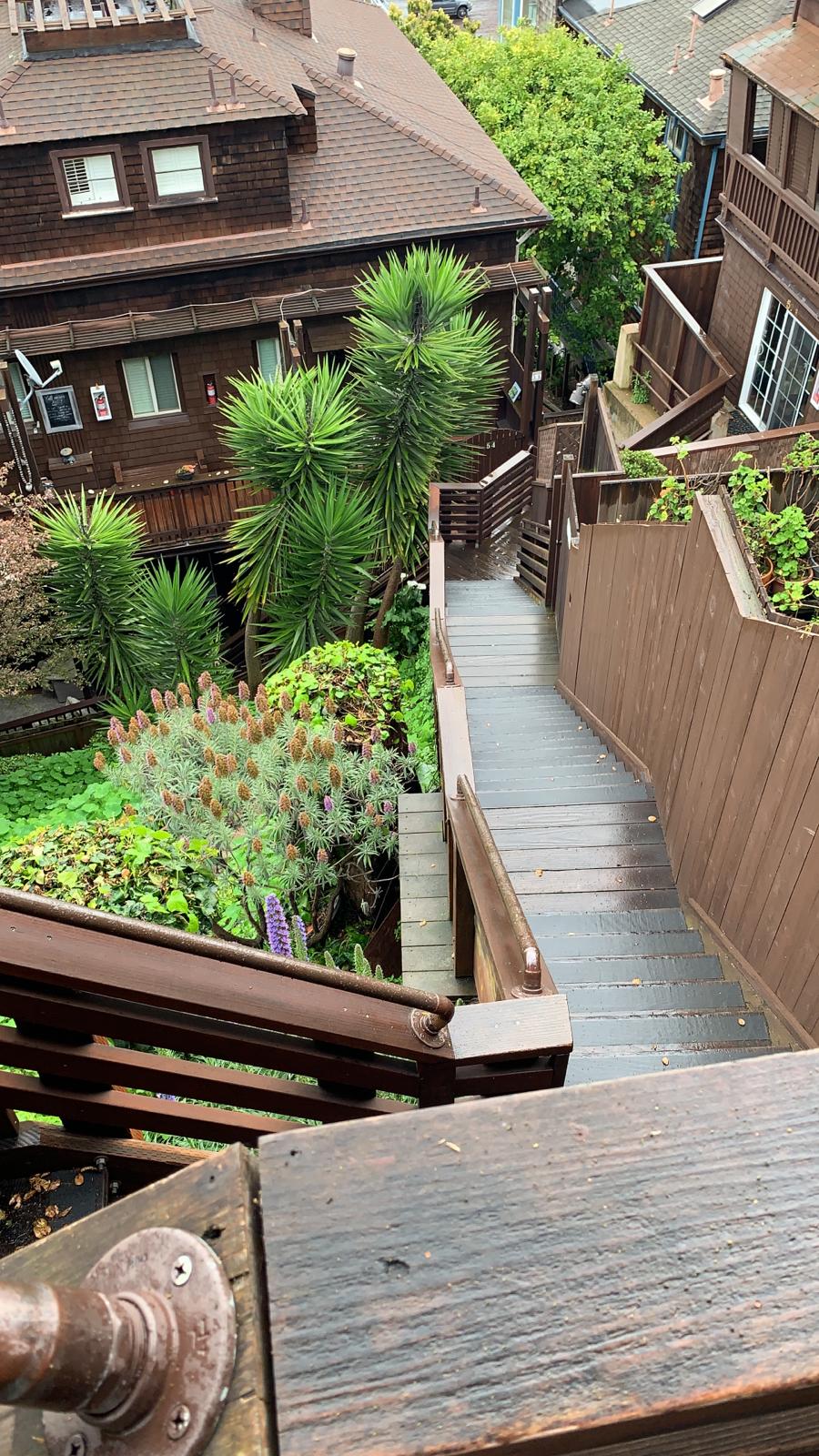 I always ask customers if we can run our hoses from our van into the house, and sometimes we get a “yes – no problem!”, when it probably should have been a no. The technician had to run the hoses from the van shown in the first photo, through the bushes in the second photo, over the wall in the third photo and then into the house. This kind of maneuvering is why we are sometimes late to the next cleaning. 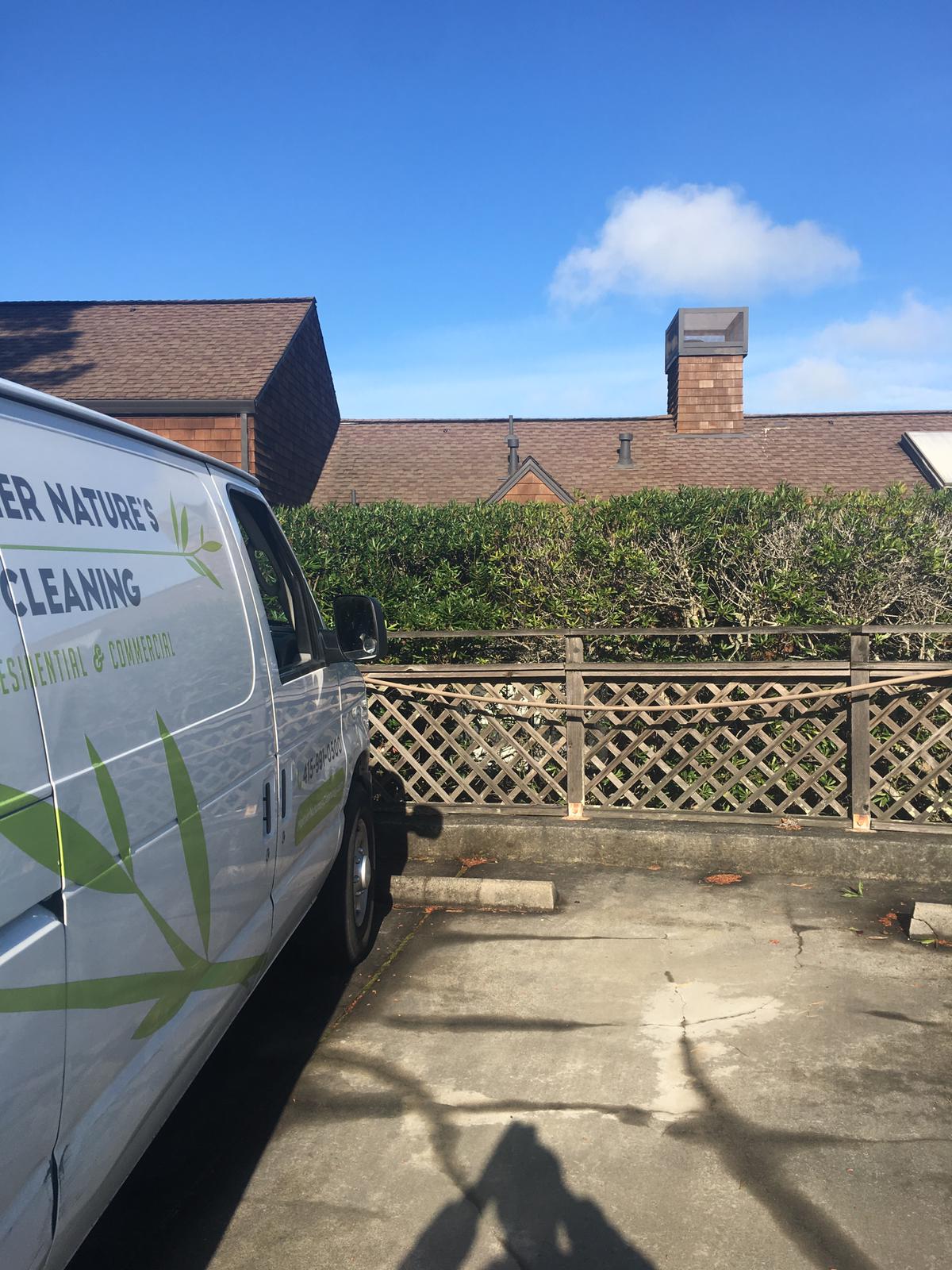 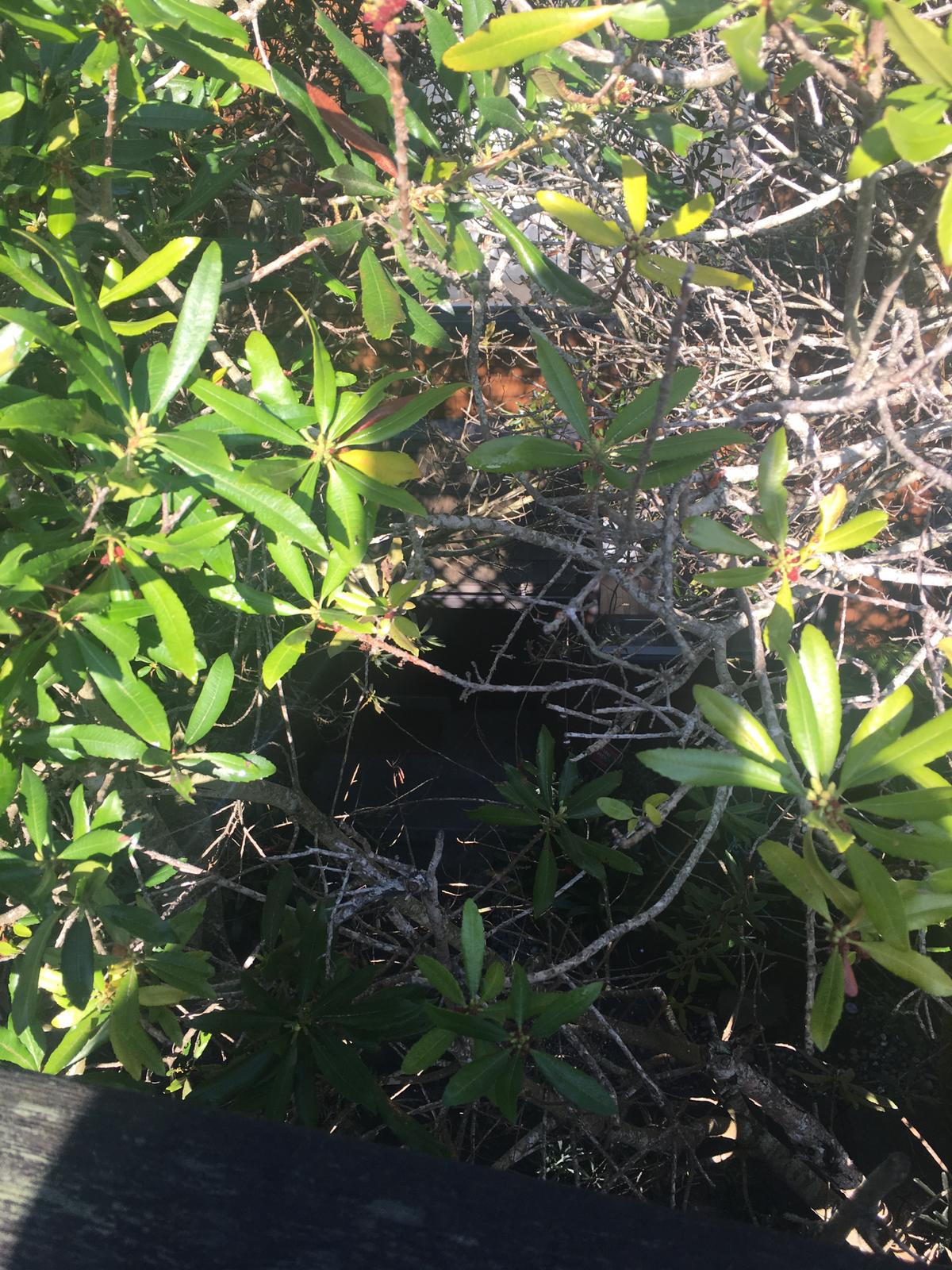 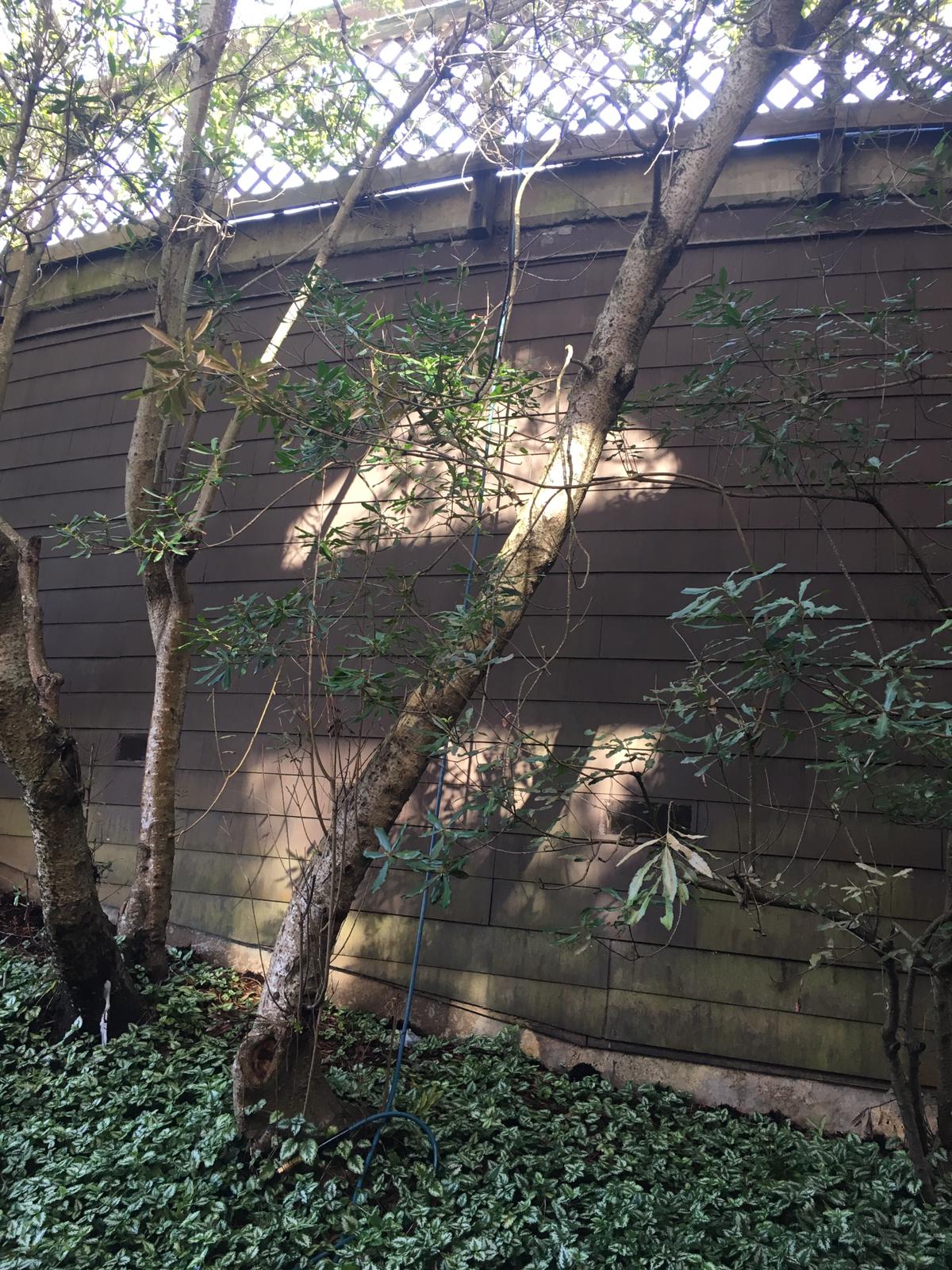 Latex decay is a big issue that we face with area rugs. Machine made, tufted rugs are covered on the back with an incredible amount of latex glue to hold the fibers in place. Over time and repeated washings, this latex starts to decay, causing white powder to sift out of your rug, and ultimately the rug looses its shape and structural integrity. This example is particularly bad, and in this case we cannot do a full submersion wash because the rug will quite literally fall apart in the “bathtub.” No amount of wine or therapy can save this girl from the dumps. 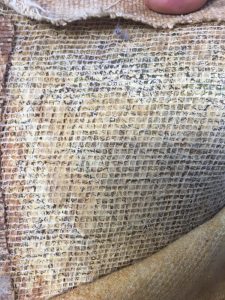 We got some fan mail this week. There was no signature and no return address, so we can only wonder who it was that asked us to turn off the rain. We promise it can’t rain all the time! Believe us – we don’t love it either as it is bad for business, but it sure does make those hills look gorgeous and lush! Click on the letter to read it. 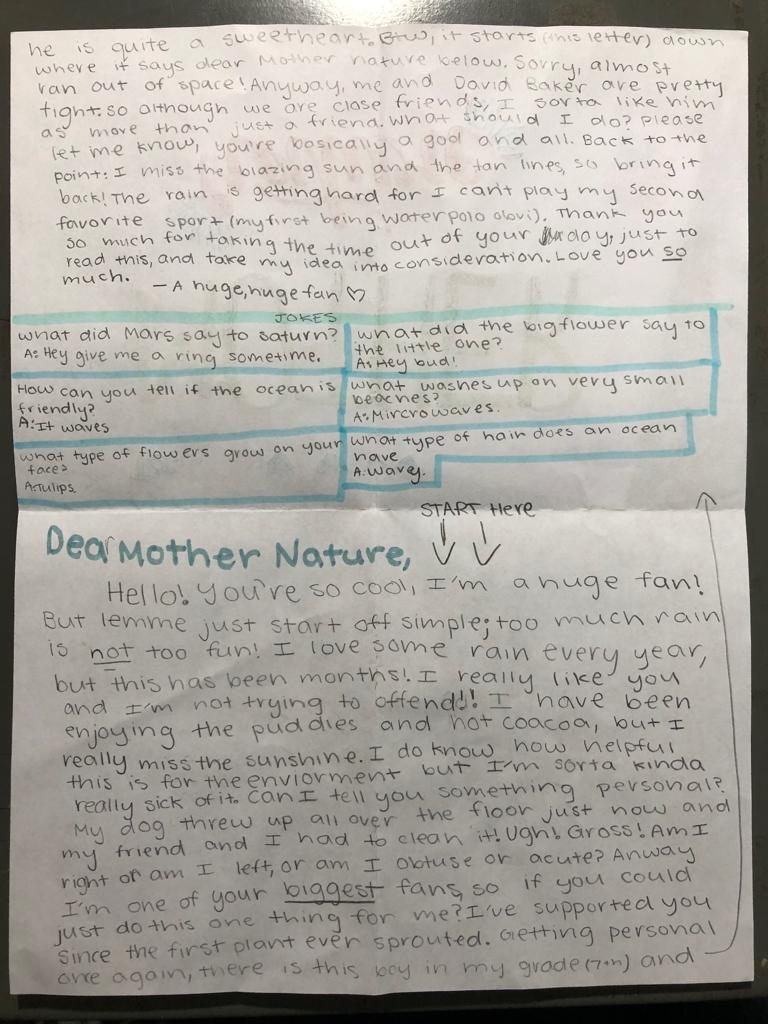 It surprises me every time I see urine being washed out of a rug or cushion. Pet urine is much more concentrated than the urine from even the most dehydrated of humans. The amount of yellow flushing out of a rug during a pre-rinse is often astounding. Being a pet owner myself, I now frantically jump to sop up every accident with haste and motivation (and a bit of  panic.)